Don Juan Curico is a 63 year old maestro curandero from the Cocama natives, who were together with the Shipibo indians the most dedicated to traditional medicine and Ayahuasca. He is humble, and has a great number of beautiful and autentic icaros (songs) and prayers.

He got raised and teached  by his grandparents, who were both great Maestros (Tzumi Murayas) and although they passed away years ago, they still assist Don Juan spiritually in his healing ceremonies.

At this moment he has more than 40 years of experience in curing people and succesfully cured depression, vaginal disseases, skin disseases, artritis and reuma, to give a few examples. He is also a specialist in curing black magic and spells.

Juan says ´Traditional medicine is a science that is barely investigated by scientists and their written books do no compare with the science of nature. The science of nature are the plants, and they are the best teachers you can find. Each individual can be orientated by them.

The forest is one big natural pharmacy and he recommends the youth to not forget about traditional medicine and the customs of his ancestors.

Click here to watch our reportage in which Don Juan Curico speaks about the plant diet, ayahuasca and the customs of the Cocama natives >> 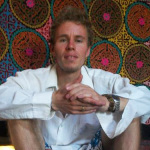 I have stayed a period with the Shuar indians from Ecuador where I participated in the Natemamu ritual , a custom they practice traditionally once a year, where big amounts of  tea of the vine only is taken during 4 days, while fasting.

It was there where the Ayahuasca planted a seed within me and where I was able to see and feel with my whole spirit  the sacredness of the creation of God and where I could understand that the nature wants us to be happy.

After I have been teached by Norma Panduro during 2 years, and after she passed away in 2007, I have finally  been teached for 4 years by Don Juan Curico, a Cocama native who became my greatest teacher of all and my Godfather.

Through many strict diets with several plants and trees, participations and iniciations during healing ceremonies, I was able to connect myself with the ancestral spirits (Tzumi Murayas) and have I learned through them how to handle and transmit their energy in ceremonies.

This connection requires strong discipline and sacrefices in the plant diets, but is of great value and importance in the healing ceremonies and in the ability to guide people safely through their journeys and diets with the medicines.

´The Amazon rainforest is mysterious and a  powerful place to experience and   practice the plant diets and grow this way towards a healthier fisical, mental and spiritual condition.  I feel happy to receive and support the visitors while they stay with us and I am always willing  to share my experiences.

During programs Roy usually joins the participants in the plant diets and  assists and guides  in the healing ceremonies. He is also a translator for the visitors. 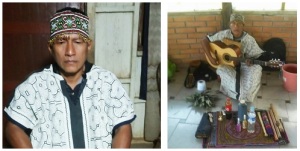 William Llerena Murayari, 53 years old, was born in Iquitos and now lives in Pucallpa for the last 25 years. He was an Arts teacher in Pucallpa for 25 years, and in 1996  he decided to dedicate himself to natural medicine.

He got trained by Don Solon Tello from Iquitos and Jose Campos and Roni Rengifo from Pucallpa. He descends from his mothers familiy line who also were curanderos.

Besides that, he is also a musician and artist and uses his musical talent in the ceremonies with Ayahuasca.

William says ´the songs that I sing are the fruits of the work with the medicines. It was the mother Ayahuasca that inspired me and helps me to sing from the bottom of my Soul, the icaros, which is the language of the plants. That is why we can connect directly with the spirits, entering profoundly until the heart of the earth, the rivers and outer space, when the icaros are sung in a ceremony.´

In ceremonies William combines songs and icaros using different kind of instruments like the guitar, charango and flutes. This combination makes the ceremonie very special and unique. 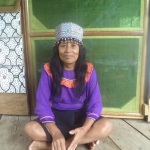 Doña Maria is a humble, somewhat shy native Shipiba indian who dedicates herself mostly to the medicinal plants and taking care of her family and partly to the textile weaving.

She says that her grandfather was a well trained curandero (medicineman) and he always told her that it is good that she listens to the sacred songs and icaros that he sung in the ayahuasca healing ceremonies, while curing his patients. This way she learned authentic icaros and songs  in her native language, that she beautifully sing in the ceremonies.

When her grandfather would cure a family member with the plants, she was always present and her grandfather said that she had to watch carefully so she would be able to prepare remedies as well.

Doña Maria is a specialist in curing black magic and spells with the plants.

Nowadays many foreigners come to visit our forest she says, and she is willing  to share what she has learned.